Posted on May 24, 2018 by anewenglanderslife

This year, the garden is on a much bigger scale. I’ve put in two raised beds for veggies (one for asparagus crowns, one for everything else), as well as created two beds for some flowers.

I’m still kind of fumbling along and figuring out everything as I go along, but so far it’s been very satisfying to watch everything take shape.

A couple lessons I learned this year-

1. I don’t have enough sunlight inside to start plants. I tried, and everything became so leggy!

3. Everything takes longer than you estimate, and raised beds take more dirt than you would think!

As this weekend is Memorial Day, I’m going to pick up some veggie and flower starts from a local farm and get them in the ground. We aren’t technically frost free yet in my zone, but it’s looking nice and warm for the next week or so.

I’m excited to spend more time playing in the dirt this weekend.

Posted in garden | Tagged a new englander's life, in the garden, spring | Leave a comment

Posted on May 8, 2017 by anewenglanderslife

My recent trip to Atlanta was a perfect time to escape the late mud season in New England. That’s always my favorite time to go south- New England isn’t too pretty then and it hasn’t gotten too hot in the south for this northern girl to handle! 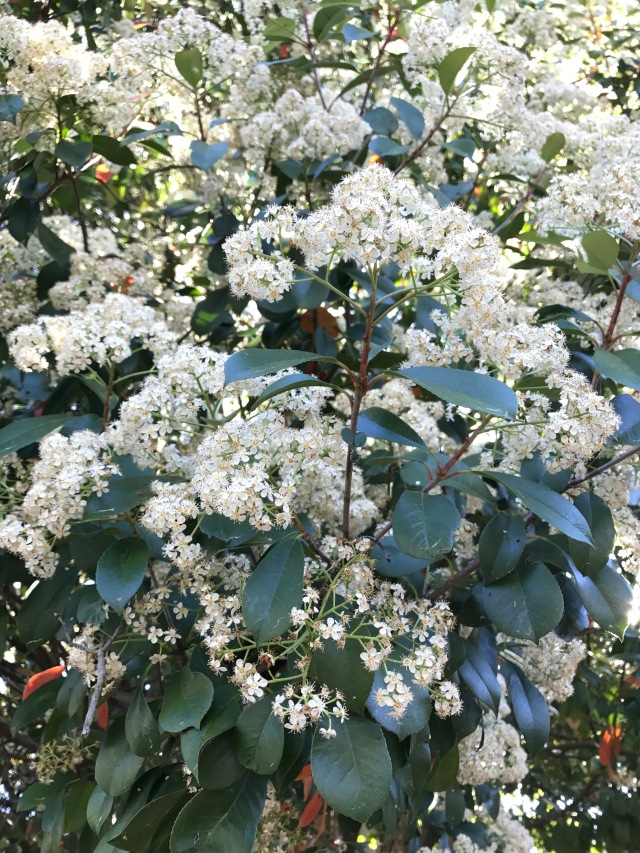 I’ve been to Atlanta before (see here) so this trip was mostly spent discovering new places to eat and exercise (my ideal vacation has a good amount of both!).

I had such a good feeling about Chai Pani as soon as we walked in and saw families with women in saris waiting. It was truly great food! They do a take on Indian street food and we just got a bunch of things to share. The kale pakoras were really good, but the Maharaja Lamb burger sliders were excellent! We also got their thali which came with loads of sides. They also have delicious cocktails that I recommend checking out. 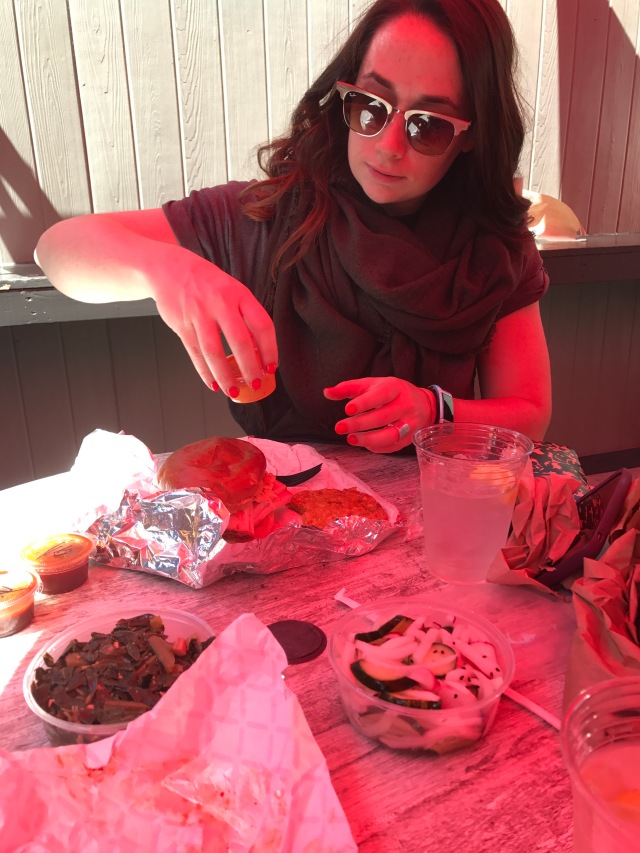 This was such a random find. There was an article about fusion BBQ places in my local paper at home and I thought a Korean BBQ fusion sounded amazing so I saved the name for my trip to Atl. It was so good! And so much food! We each got a sandwich special which comes with a side and then got one more as well. There is a patio out back where you can stand under red umbrellas to stay out of the sun, hence the odd lighting. It might be slightly out of the way, but it was so good and pretty darn cheap! 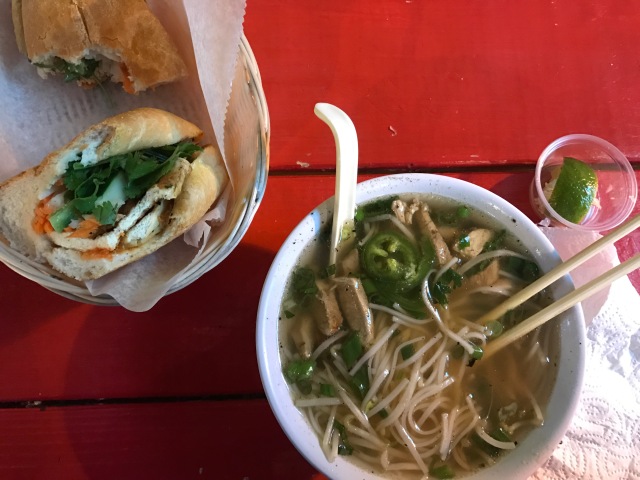 This is a repeat place because it is just so good! Excellent Vietnamese food is served here, and next door they now have a place to sit and a Market of pop up restaurants that they call the Global Grub Collective. The pho I had was so good, but the tofu banh mi really stole the show. The flavors and textures are just all so perfectly balanced.

We Suki Suki is located at 479-b Flat Shoals Ave SE Atlanta, GA

Another repeat place because they have such amazing doughnuts! I love how doughy their yeast doughnuts are, though this time we also go the carrot cake cake doughnut. The only slight disappointment was the Boston Creme- while delicious, it was not at all like a Boston Creme!

My sister referred to this as “the Starbucks of yoga.” Yes, it’s not very spiritual, but it was also fun! We did the class with weights and let me just say it’s amazing how much harder a couple of weights make warrior pose and triangle.

This was a much more traditional class in a heated space. I loved this class! The teacher (Caron Christison) managed to make it a true all levels class which is super impressive. She would suggest modifications to up the intensity or to lower it while still not talking the whole time. She also led the most killer abs session that I’ve experienced since a workshop with Patrick Beach!

This class combined two things I’d never used before- a curved treadmill and a Pilates reformer. I can’t run anymore due to knee pain, but something about the curved treadmill worked for me! Maybe because it is sort of suspended and you aren’t just pounding your knees? Anyways, I loved being able to run and I also loved that with a curved treadmill there is no electric power so you control the speed by how far up the curve you run. For this class, you spend half the class on the reformer (which was so cool and seriously kicked my butt on that portion of the class) and half the class doing various intervals and sprints on a curved treadmill. They are such great compliments to each other and it was a great class, despite the technical music issues they had (an insane storm was sweeping Atlanta during class which messed up the Bluetooth). But, we had music in the end and everyone was super sweaty!

Posted on May 1, 2017 by anewenglanderslife

I had heard of Grace from a friend several years ago, and was so glad to get to eat there on a recent trip to Portland.

The venue is gorgeous- it’s an old church and they have kept a lot of the details- stained glass windows, organ, wood panels, etc but ripped out the pews to make space for tables.

The food was very good, though oddly it was the local organic salad (French Brie, pistachio croutons, figs, and rose vinaigrette) that blew both of us away. My halibut dish was great as well, but my friend found her sunchoke risotto too salty. For dessert, I tried the matcha tiramisu (it was interesting and I did eat it, but would not order again).

The food is good, but the atmosphere is better.

Posted on January 22, 2017 by anewenglanderslife

Saturday was a very exciting day for me- I went to Boston with a friend to attend the Women’s March. As soon as I heard about the event, I had a strong feeling that I had to go to make my voice heard, and I’m so glad I did!

A couple weeks before the march, my friend sent me a link to the Pussy Hat project. I’m not the best knitter, but I knew I could make this simple hat. It came together very fast!

Getting to the march on Saturday ended up being more of an adventure than we had planned on. We ended up walking over 4 miles from Porter Square all the way to Boston Common since all the busses and trains were packed. We were so lucky -it was a lovely day for a walk across the city, and as we crossed the Longfellow Bridge into Boston surrounded by people also going to the march, I got goosebumps.

The Common was packed (the latest estimate I saw was that 175,000 people were there!). I’ve never been in a crowd that big, but people were cheerful, energetic, and polite and it was so inspiring to be surrounded by people supporting women’s rights, black rights, and immigrant’s rights. 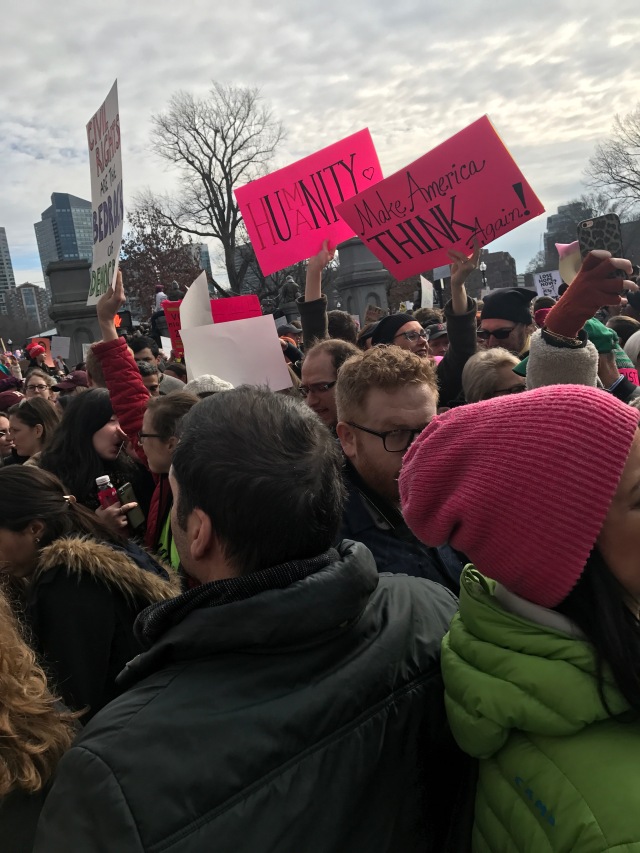 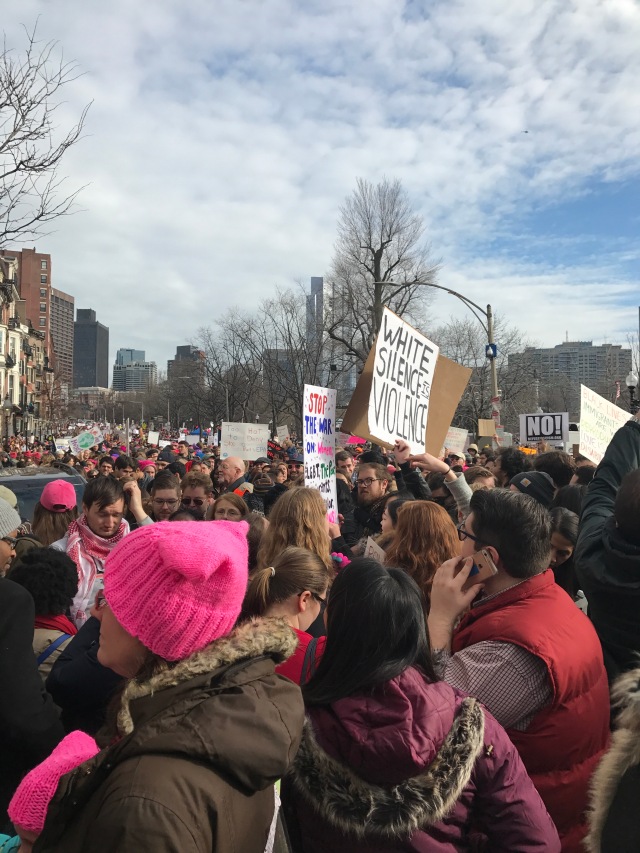 Finally, we started to march. We marched along the Common, up part of Comm Ave and back to the Common, and as we passed the Unitarian Universalist Church right next to Newbury St, we could hear the bell ringers playing “Ode to Joy.”

It was such an inspiring day just to see so many people of all ages and so many different backgrounds coming together to make their voices heard. I am so glad I was there to make history.

Posted on January 1, 2017 by anewenglanderslife 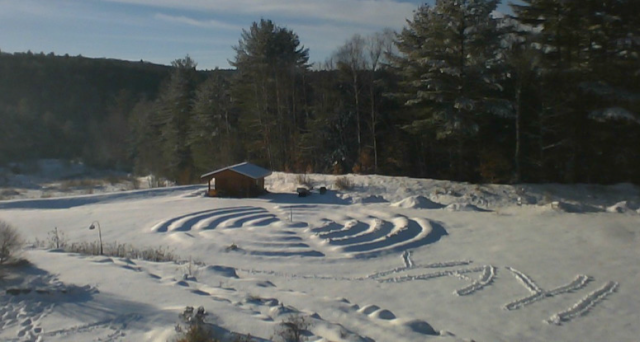 Instead of a long list of resolutions, I like choosing on thing to focus on in a year.

In 2015, I decided to do things I wanted to do even if I couldn’t find anyone to go with me. This was life-changing for someone who is as shy as I am! I’ve continued this practice ever since and have gone to concerts, yoga workshops, and restaurants by myself. It still takes some courage for me to go, but it’s so great to know I will be fine even if I go alone.

In 2016, I focused on choosing happiness. I do not by nature focus on the bright side of life, so this was a way for me to change my mindset. The main thing I took away from this practice was that happiness is a mindset and a habit. It’s also not about ignoring the bad stuff- just recognizing that even if everything is falling apart around you, you can internally remain happy. It’s definitely a practice- I need to keep choosing to be happy over and over again. I didn’t always succeed with choosing happiness (there were some rough times for my family and for the world in 2016!) but I think I’ve come a long way.

In 2017, I want to create a daily habit of meditation. I’ve dabbled before, especially in times of stress, but have never made it a daily practice. I feel much more centered when I meditate every day- much more in touch with my own wishes and desires. If I know what I want, I’m much more likely to follow my own path and not be swayed by external expectations.